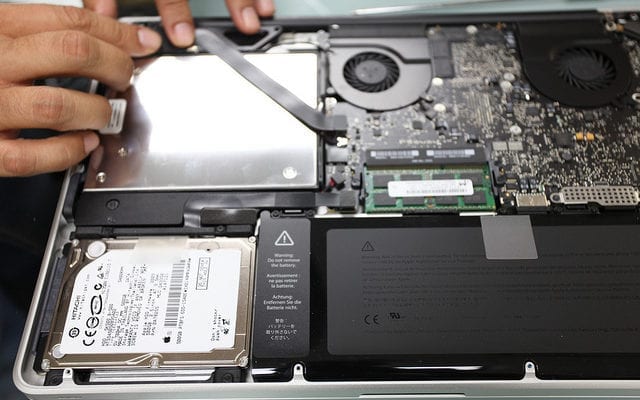 We have some news for you; Apple’s ditching the way its machines store your files. APFS (Apple File System) will soon be rolled out as standard, effectively making the existing HDD (Hard Disk Drive) obsolete in their systems. This is not good news if you continue to run your Mac with HDD hardware.  The inefficient nature of APFS for HDDs makes it of paramount importance that users change from any existing HDDs in their machines to the much more compatible SSDs instead.

For anyone out there wondering what we mean and why we’re telling you this, we’ve broken it down into this easy guide, avoiding the jargon and tech talk that can make things a little confusing.

Think of the storage in a Mac’s SSD (Solid State Drive) as having building blocks in it. For example, if you have a 12 GB movie file, “My 21st Birthday” taking up two separate blocks of data in terms of its storage, when you play this movie file on your Mac, here is what will happen:

There is a smooth transition from one block to the next, giving the user the appearance on the screen that the video was a single block of data, when, in fact, it was two.

The files you save on your Mac don’t just go into one single block and live there forever; they can be broken down and shared out among several blocks if they’re larger files.

HDDs are essentially just a metal case containing five discs (moving parts) which store all your data instead of the blocks to save your files.

In a move that is like a record player playing a vinyl, when your HDD needs to go to a new part of a disk, a delay occurs as the head shifts to a different location and waits for the correct part of the disk platter to be under the head for the reading to kick in. This would be a bit like you moving the needle to find the next track on the vinyl you’re playing.

This sounds like a lengthy process, but in real-time, the delay is typically around 1/250–1/100 of a second. The chances are that you won’t see any sign of a delay when your Mac’s HDD is reading a file which is in a couple of blocks; however, if it’s having to read a file that’s scattered across anything from 1,000 blocks upwards, you can only imagine how slow it will be. However, this is an annoyance and general inconvenience you can avoid by having your HDD swapped out for SSD.

Additionally, if you’re a working professional or university student, you may work on large files that require lots of edits. You could possibly experience major delays in speed, which again, will cause frustration when trying to complete your projects.

What we’ve just mentioned is a huge reason why HDD and APFS do not play nicely, and you will notice drops in performance if you don’t do something about it!

Switching to SSDs have no moving parts, instead they are made up of a chip with an indexing system running them, translating to a far more seamless user experience. APFS only rewrites changed data when you edit something and save it. This saves masses amount of time when it comes to reading the data of your files, therefore making SSDs and APFS a lovely matchup.

The point we’re trying to make is that during the saving/editing process of a file, SSDs don’t require those ‘back-and-forths’ as your Mac tries to locate and relocate certain aspects of the file you have saved. APFS will only rewrite and save the edits instead of saving the entire file again from start to finish, which requires your machine to reallocate the file where ever there is block space.

Here’s how the APFS copies your data:

And this is how the APFS writes your data:

If you have any more questions about Apple’s latest move, or you are unsure if your machine will be affected by it, then get in touch with our team of experts here at MacBank, one of the UK’s biggest sellers of refurbished MacBooks for sale, who will be more than happy to help! We can assist you with purchasing the perfect Mac for your preferences that is also SSD-based.

No Comments on "Apple’s Move to APFS: An Easy to Understand Guide"