It seems as though there have been a ton of Apple events recently, especially over the last couple of months but on the 10th of November, Apple held its last virtual event of 2020. The ‘One More Thing’ event. Following the announcement and release of the iPhone 12 last month, many Apple fans were expecting this event to shed some light on the new Apple Silicon Macs that were announced at this year’s WWDC and Apple did not disappoint. The event saw the unveiling of the first Apple-made chip for Macs, the M1 chip.

Five-nanometer chip with eight total cores. Four high-performance cores and four high-efficiency cores, which is somewhat similar to what we have seen from the new series of iPad and iPhone A-series chips.

But when we refer to this ‘chip’ it is not just a CPU, this is a combination of all the functions of a computer onto one chip, otherwise known as a “system on a chip” or SoC. While this does include the CPU, it is also home to the GPU, RAM and the Apple-branded, 16-core Neural Engine. By having the RAM, CPU and GPU all tightly integrated into one chip allows these components to communicate with one another a lot more efficiently, with all the processes and controllers built inside. This also avoids the need to supply power to several different components, instead only delivering power to one chip. Not only will this reduce the total power consumption of the Mac but will also allow it to operate much more efficiently.

Having all these components in such close proximity to each other certainly has its upsides but does have one major downside. These new M1 chips are surely the nail in the coffin for user-upgradability. With the RAM being built-in directly to the chip, it removes any possibility of future user-upgrades completely. But the performance and efficiency impact that this SoC has surely far outweighed this downside. 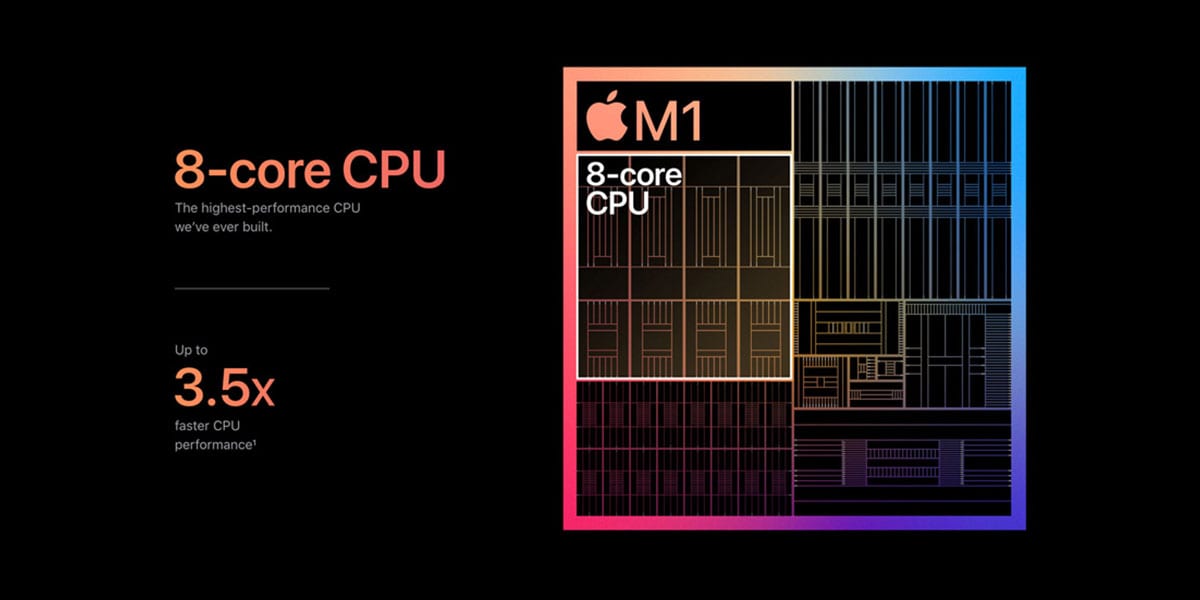 It was heavily rumoured that the MacBook Air and perhaps even the MacBook Pro would be the first to adopt these new ARM-based chips. It appears that these rumours have rung true. This new 13-inch MacBook Air is just as lightweight and thin as traditional MacBook Airs but the addition of the M1 chip has truly transformed what we can expect from this device in terms of performance. Apple has made some huge claims, stating that we can expect to see a 3.5x faster CPU and 5x faster graphics performance. Thanks to a new controller in the M1 chip, the SSD found within the new MacBook Air is said to be twice as fast. But what was perhaps even more impressive was that during the event, the MacBook Air was even demoed editing multiple streams of 4K footage in Final Cut Pro. Which for a device of that size is extremely impressive.

These new MacBook Airs have also seen massive improvements in their battery performance too. Apple claims that this new device will fetch 15 hours of wireless web browsing and 18 hours of video playback. 6 more hours than the previous MacBook Air. It was also rumoured that these new entry-level Macs with Apple Silicon would be slightly cheaper than their predecessors but this was not the case. This new Macbook air with the M1 chip will start at £999 and is available for pre-order on the Apple website today.

This new rendition of the MacBook Pro is essentially the same body as its predecessor but now features the Apple-own M1 chip. Just like the Air, this new MacBook Pro is set to offer some really incredible levels of performance. 2.8x faster CPU performance as well as a staggering 5x faster graphics performance. Battery improvements are also among some of the most impressive features of this new device. Apple has promised 17 hours of wireless web browsing and 20 hours of video playback, twice as many as the previous MacBook Pro. Achieving all these impressive figures while remaining at the same price point as previous models with the base-model Pro starting at £1,299.

Apple also announced that the new M1 chip would also be coming to the Mac Mini, an announcement that may have taken quite a few people by surprise. Again, this new Mac Mini is visually very similar to previous versions but the addition of this new chip sees performance skyrocket. Apple has made another series of bold statements stating that this new Mac Mini is capable of 3x the CPU performance and 6x the graphical performance compared to the previous model. The Mac Mini will also be the cheapest model offered by Apple that comes with the new M1 chip, starting at £699 and can be preordered now.

As of yet, Apple has not yet mentioned when we can expect to see Apple Silicon chips feature in their desktop lineup. It makes perfect sense for the MacBook and Mac Mini line to be first to feature these new and improved chips as Apple still needs to optimise for the limited thermal headroom and power efficiency that these devices are restricted to. But when it comes to the desktop lineup, the need to optimise for this is no longer there and Apple, in theory, can place all of their focus on optimising for power and performance.

These numbers promised by Apple certainly sound impressive but they are only claims at this point in time. Once these new Macs start to find their way into consumers hands, we will have a much better understanding of just what they can do. These are therefore exciting times for MacBook and Mac Mini owners all over the world and perhaps even more exciting for Mac desktop owners. With access to more power and greater thermal headroom, who knows the level of performance that we could expect from these machines.