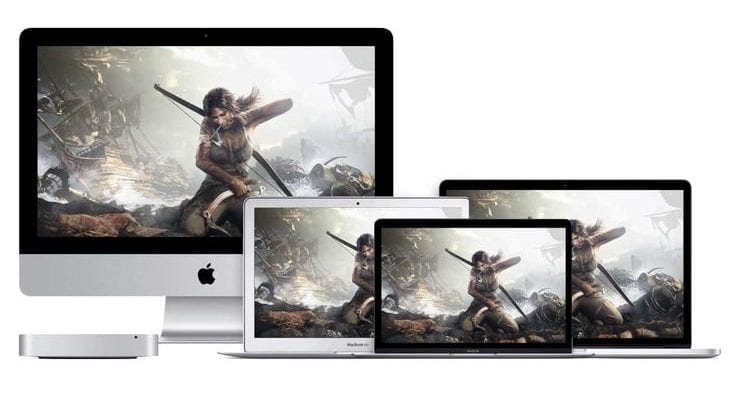 Nowadays gaming on your computer is becoming more and more popular. The console wars might still be waging, but the power of a personal desktop computer or portability of playing on a laptop has made PCs extremely popular. At the same time, though, more users are turning to Macs for their gaming experience, and developers are becoming more and more open to producing or configuring games to run on OS X. In this blog article, we talk about gaming on an Apple device, whether you should do it, and how to get the most out of your Apple computer for gaming!

Why are Apple Computers Now Good for Gaming?

Apple computers are all top-of-the-line at what they do. In particular, the MacBook Pro and the iMac are fantastic high-power devices that can keep up with the most intense modern games. The recent introduction of Metal API in 2014 (and Metal 2 in 2017) means a new or used Apple computer can render 3D graphics and shading quicker than ever before. In the past, Apple used OpenGL API but stopped seriously supporting the API since at least 2011. This, in turn, led to Apple devices being poorly prepared for gaming. By contrast, Metal has an incredibly positive reception among the game development (and professional app development) community, which means more Apple computer support for gaming is likely in the coming years.

Higher end Apple computers also now come with eGPU support as standard. eGPUs are external graphics processing units, which are designed to be plugged in and used in addition to your computer to improve its performance when completing very resource-intensive tasks. eGPU support means Apple computers can now also be given additional graphics performance capabilities for professional apps, VR content creation, and, of course, for gaming.

What is the Best Apple Computer for Gaming?

When it comes to Apple gaming, there are two sensible options: the MacBook Pro, and the iMac 27”.

The iMac is, hands down, the more powerful device. While the highest-tier MacBook Pro operates a Radeon 560X video card, the entry-level 27” iMac runs the even better Radeon Pro 570 and can operate Radeon 580, which is generations ahead of the MacBook Pro’s capabilities. Since 2014, iMac 27” computers also come with what are still industry-leading 5K displays, making gaming more visually appealing than on any other device. Since 2017, the highest end iMacs have even begun to run Xeon processors, another crucial advantage over the MacBook Pro.

The MacBook Pro has one crucial advantage over the iMac, however: portability. If you are stuck on a long train or plane journey or want to take your computer to a friend’s house or out of the bedroom to the living room to play, you will need a MacBook Pro.

What are the Best Games for Mac?

You have to either deal with a limited games pool or install a multibooting utility or Windows virtual machines like Bootcamp or Wine if you want to play on Mac. The latter is rather straightforward, but if you want the best games for an Apple computer using native OS X, some great choices include:

It is worth noting you can attempt to run most Windows games through Bootcamp on a Mac device, though how well each game will run depends on their computer requirements.

How to Improve your Mac Gaming Performance

If you want to improve your Mac gaming performance, your best bet is first of all to try some of our tips on How to Speed Up Your Mac. To improve your Mac’s gaming performance the most important thing will be to make sure everything is running as quickly and smoothly as possible. To do this, follow our tips about closing down unneeded tabs, applications, and bits of software that would otherwise grind your computer to a halt.

Next, you should try all the different graphic settings on games you want to run to see how that affects performance. This means not just the graphics setting of your game, but also checking its performance using the Mac’s Activity Monitor and trying Windowed Mode versus Full-Screen Mode to see the impact. The Witcher II is notorious on MacBook devices for not working correctly in full-screen mode!

Finally, you can always consider using performance-enhancing devices to improve your computer’s speed and quality. If you have a strong WiFi connection, NVIDIA GeForce Now allows you to rent a powerful remote desktop computer and stream its screen onto your device. This means you can install games onto that remote computer and let it do all the heavy rendering and processing, while your Apple computer streams merely a video of what would be displayed on that remote computer’s screen, meaning hardware limitations are no more of a problem. Similarly, you can also try out an eGPU to improve the graphics processing unit of your Apple computer.

Once you’ve trialled these options, your games should hopefully play a little more smoothly. How did gaming on your device go? Let us know in the comments section below or leave us a message on social media! And if you are interested in buying a used Apple computer, whether for gaming or otherwise, take a look at our store for some fantastic deals!

No Comments on "Are Apple Computers Good for Gaming?"