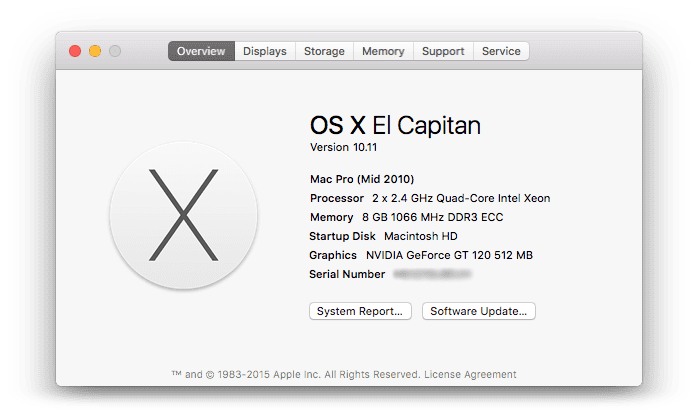 With the announcement of OS X 10.11 El Capitan recently, we immediately grabbed the developers beta and proceeded to test it in the Mac Pro 5,1. As expected it worked perfectly from the go. OS X El Capitan certainly ‘feels’ like a step up from Yosemite, it looks almost identical but is much ‘snappier’ (sorry for the buzzword but there isn’t any other way to describe it). Think of El Capitan as a more polished version of Yosemite, it’s faster and more lightweight.
There are a few interesting additions, especially Metal for Mac. Metal for Mac combines OpenGL & OpenCL into a single API, potentially providing performance increases in professional applications, we didn’t notice anything in the tests we ran in the developers beta, but we’ll report anything we find in future revisions/the final release. Adobe have stated that some actions will have performance boosts of up to 7 times, but it seems this hasn’t yet been implemented when we tested Premiere Pro.
Of course, we must mention, don’t jump into upgrading unless you have confirmed that your app/apps of choice are fully compatible with El Capitan.