This year’s mobile-focused event kicked off a Cupertino this evening at 6 pm, and with it brought the iPhone 12, the HomePod Mini, and a range of new accessories. Now we can’t blame you for not wanting to sit through the hour-long event to find out how much the new iPhone is going to cost, so here’s a summary of our most notable points for each of Apple’s announcements. 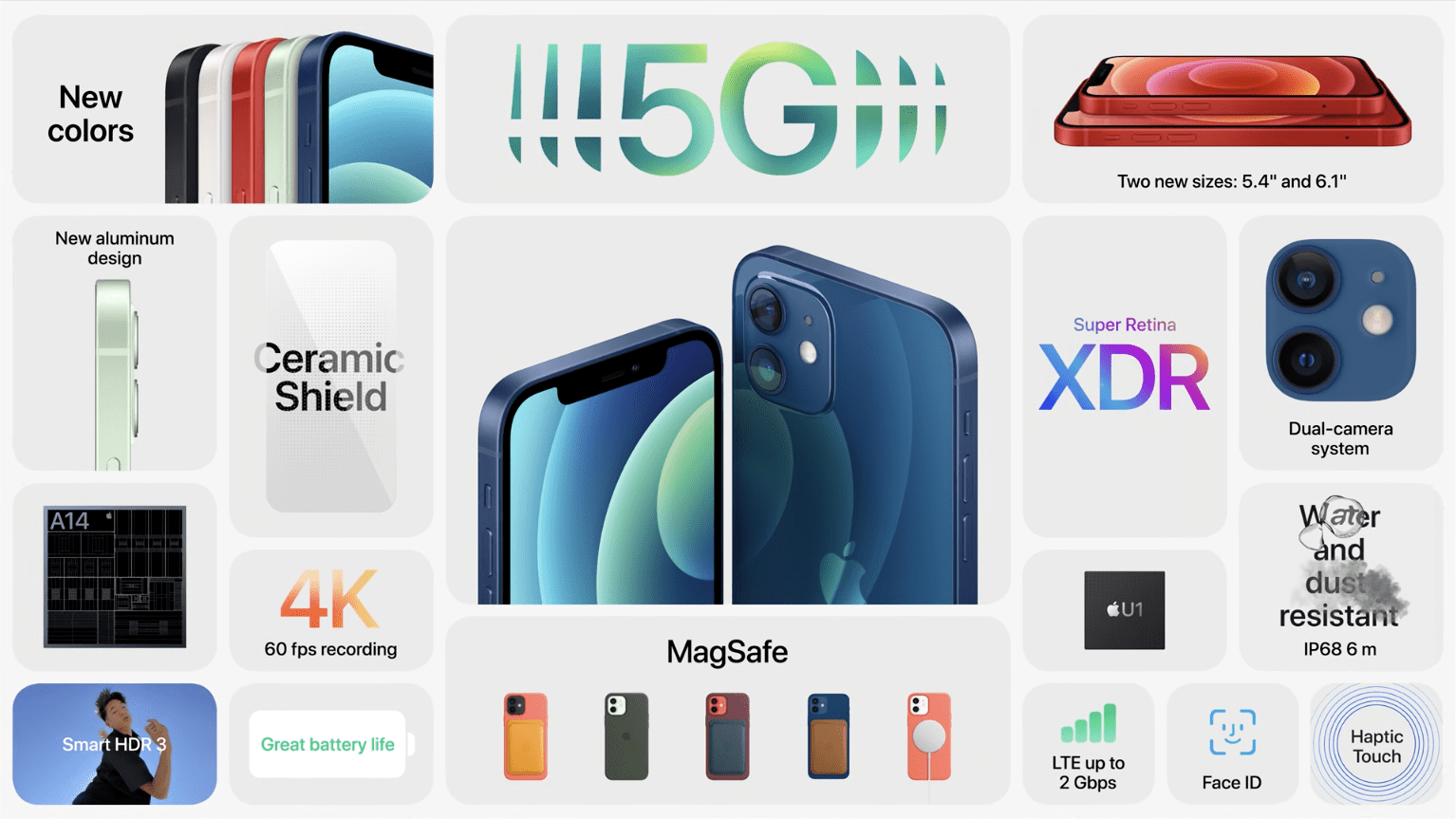 New Design. Let’s be honest if you’ve been a long-term iPhone user, you will be forgiven for seeing the similarities between the new iPhone 12 and the iPhone 5 with the return of the squared-off edges. It looks as if Apple is bringing together the design cues found in the iPad Pro with the ditching of the rounded edge screen. Phones this year will be available in black, white, red, green, and blue.

5G Ultra Wideband Cellular. The first iPhone with 5G is finally here. It’s included in all models across the range and can reach speeds of up to 4 Gbps download and 200 Mbps upload. Put this in perspective, the average home broadband speed in the UK is 46.2 Mbps download and 6.2 Mbps upload. Apple has also included a “smart data” mode, which will automatically enable and disable 5G to save battery life.

New Screen. Introducing the Super Retina XDR Display. Which is a fancy way of branding an OLED display. We thought the naming scheme was getting out of hand last year. Anyway, the new SRXDR Display features a 2,000,000:1 contrast ratio, twice the amount of pixels per inch than the previous year’s model, as well as twice the brightness. So all joking aside, this is a stunning display.

Better Drop Protection. Now if you’re a gambler, you’re odds just got better. Apple is included what’s called a Ceramic Shield into all new iPhones. Apple state that this increase the chance of your iPhone surviving a drop by 4x.

We look forward to seeing the test video online to see how much this actually makes a difference. However, screen breakages being the most common mishap to happen to your Phone, it’s good to see something being done to protect your potential £1000+ device.

Upgraded Performance. As do most new generations of iPhone, we’ve seen a leap in performance by as much as 50% across its CPU and GPU in the A14 Bionic chip. Apple is also moving its MacBooks over to Apple silicon, s,o we are most likely going to see some more drastic performance increases over the next few generations as more money is spent on development. You can read more about Apple processors in MacBooks here.

iPhone Mini. Bringing in more similarities with the iPad we now have the Mini naming scheme introduced. This makes sense as the regular iPhone, which is likely to be the most popular, is better being the standard version with its smaller and larger siblings getting a suffix. There is no difference between the standard and mini version; however, you’ll likely see less battery life just purely because of the physical size of the battery.

No Charging Plug. Yes, you read that right. You’ll only be getting a cable with your new iPhone. The Plug you’ll need to buy separately for your thousand pounds plus phone. 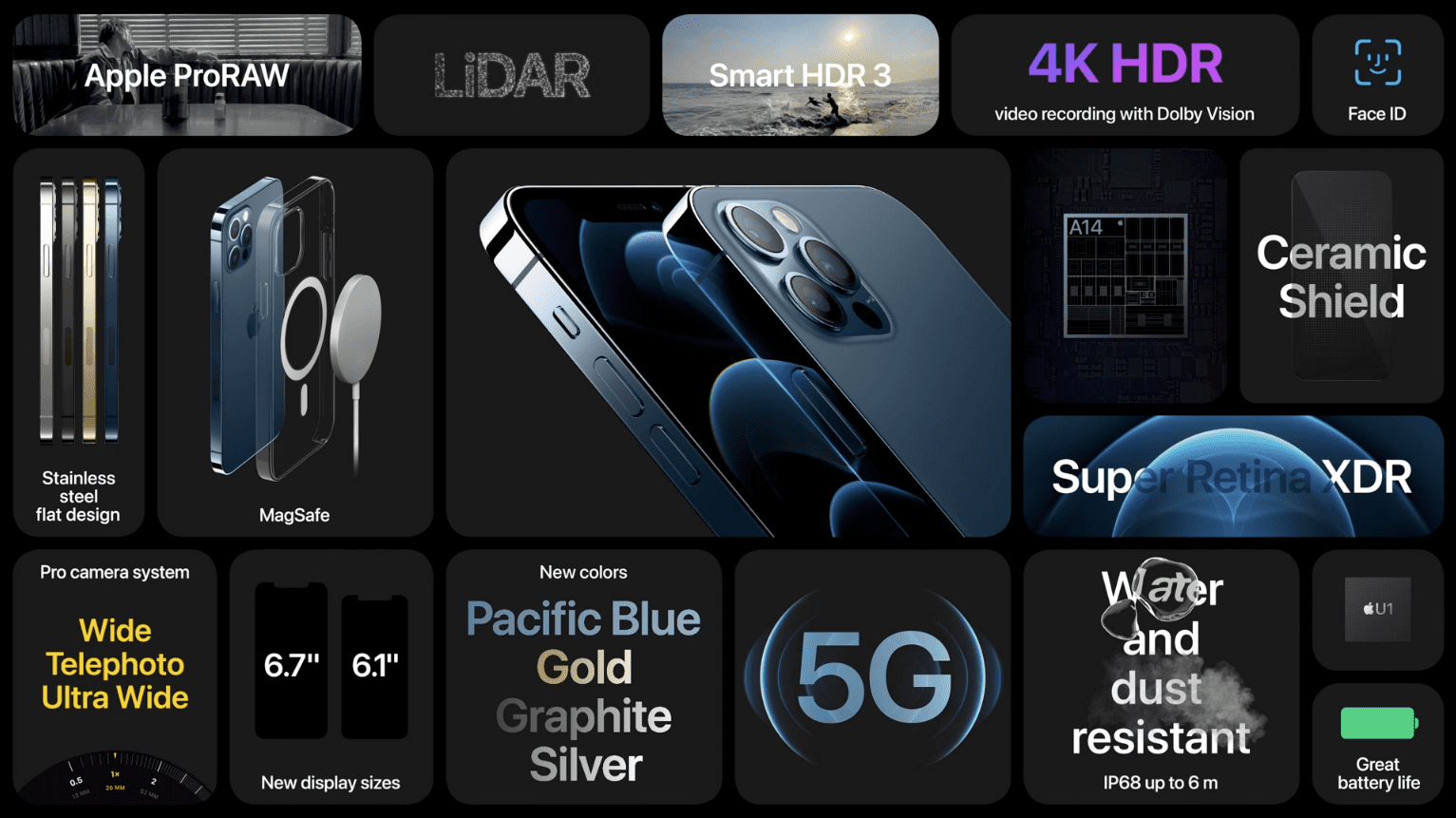 Size. So this year’s “Max” version available & 6.7-inch is slightly bigger than last years, gaining 0.2 of an inch in screen size. We assume this is because by ditching those rounded corner edges, you’re able to keep the chassis relatively the same size while pushing the screen further to the edge.

Camera Upgrades. With tweaks to the three-camera setup with have a similar ultra-wide, wide, and telephoto camera. However, the biggest difference is to capture and software than the lenses themselves. The iPhone 12 Pro will capture; in 10-bit for 60x the amount of colour, at 4k 60 fps but now with Dolby Vision HDR for a higher contrast of light and finally the new file format Apple Pro Raw to increase the control you have over the image when editing on and off your iPhone.

LiDAR Scanner. If you’re unfamiliar with what a LiDAR scanner it uses light waves to calculate distance from objects. Similar to that of Radar or Sonar, which uses radio or sound waves. A couple of benefits to this are improvements to AR as your phone now has accurate distance data rather than trying to read it from an image as well as better camera focusing and adjust in low-light condition. Make sure you don’t hold your finger over it when trying to take a photo. 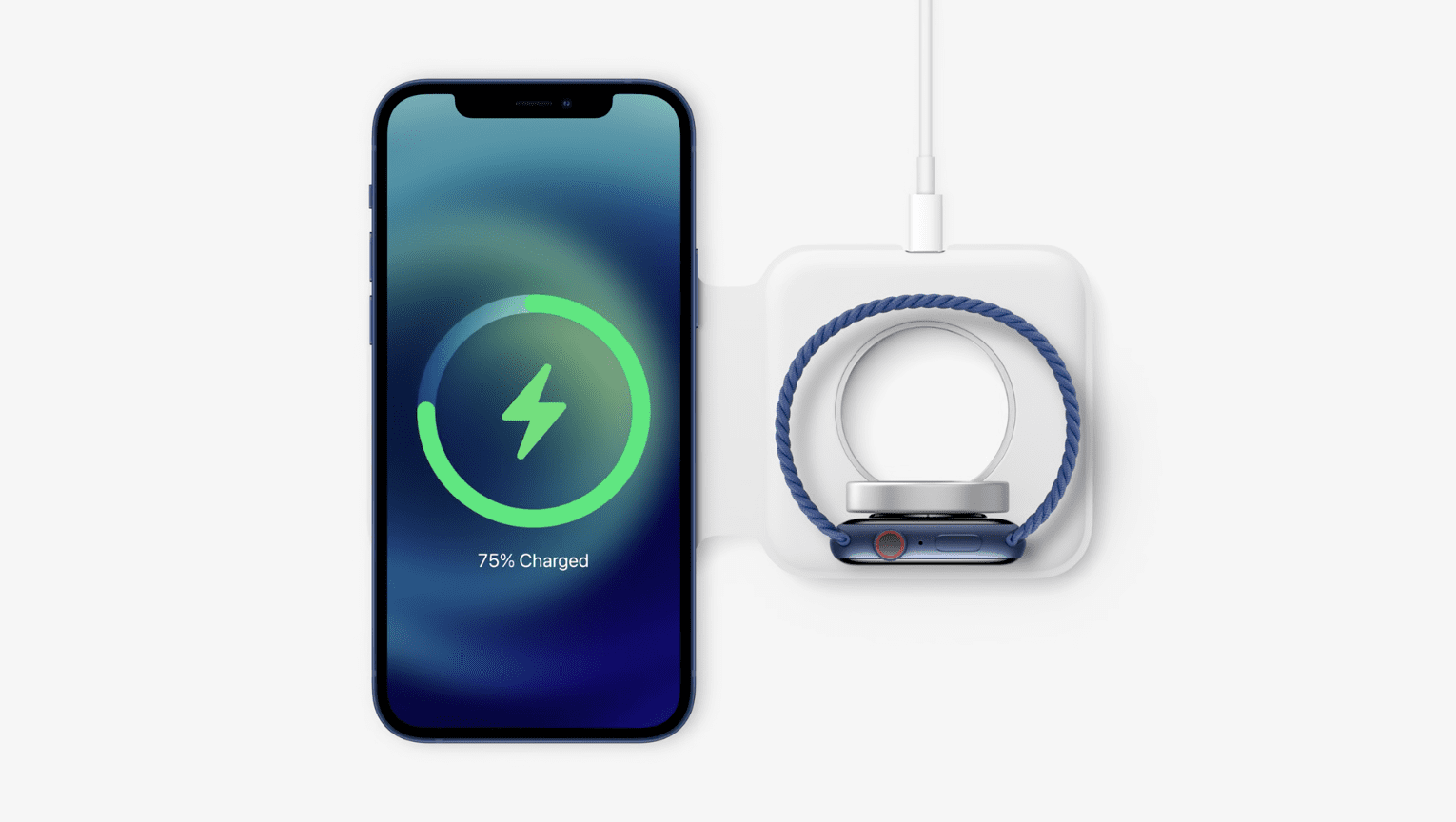 The Return Of MagSafe. It’s nice to see that it’s not entirely abandoned, and it’s an apt name considering the style of magnetic accessory connection and the ecosystem it’s introducing. There are magnets fitted to the back of your iPhone, so when using the new wireless charger or accessories, you’ll be able to snap stuff to the back. This makes sure that the charger connects perfectly. You’ll also be able to get a magnetic wallet and a sleeve case that when your phone is placed into, it detects the magnet and will continue showing the clock throw a gap in the front. 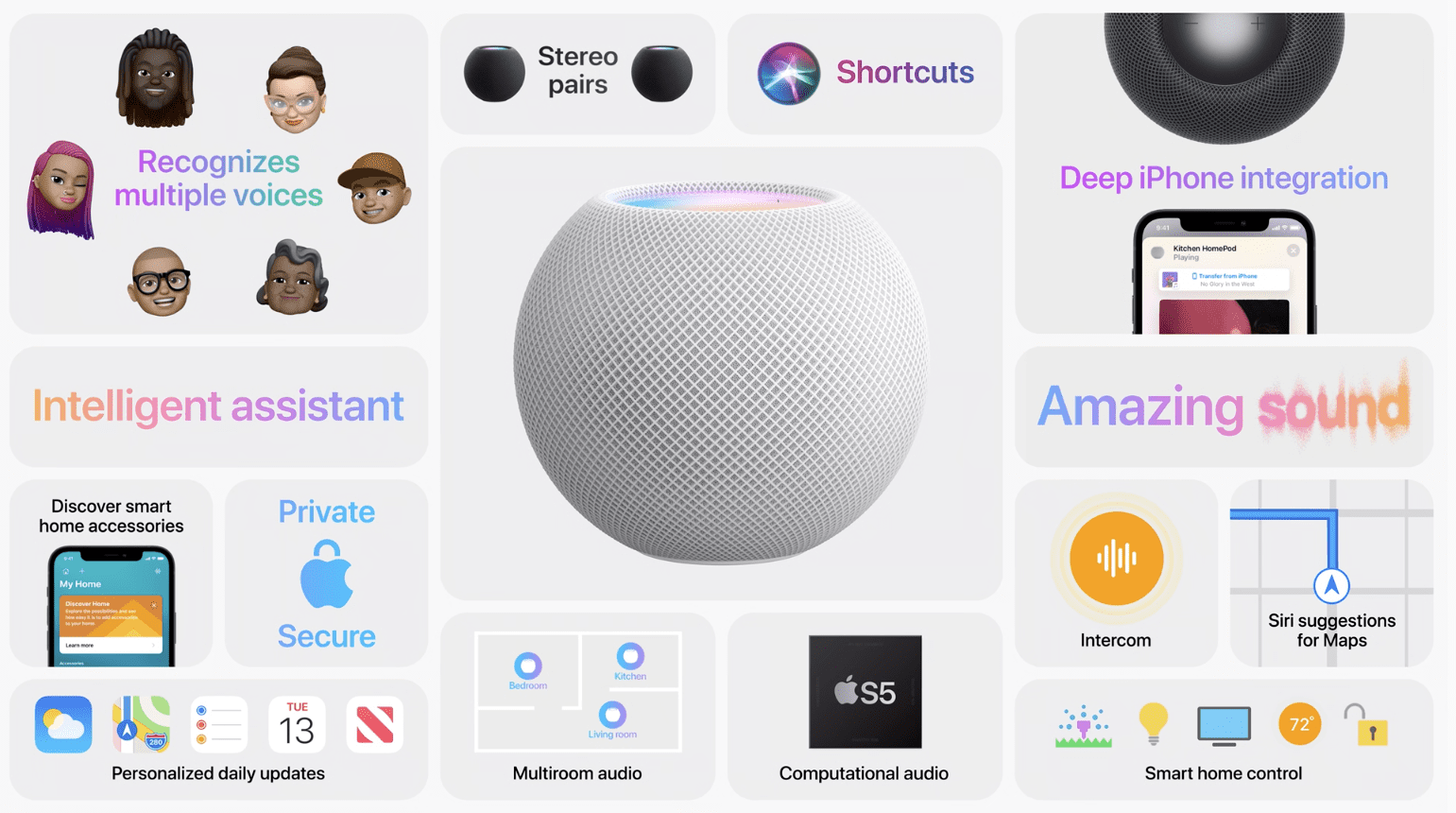 HomePod vs HomePod Mini. The new mini counterpart is more focused on being your assistant, similar to an Echo Dot. The mini may lack audio features like a large woofer and lack of spatial awareness however priced at £99 rather than £279 we can see why this is a pretty good proposition considering it contains all the same features.

Anti-Distortion. Our biggest fear with a smaller speaker was that maxing out the volume would distort the sound however  Apple has included a feature which listens to the sound coming from the speaker and automaticity equalizes.

Connecting Speakers. Apple is expecting you to end up with multiple Homepods dotted around your house so making them sync up together not only by playing audio together but if you have two in one room they will change to stereo.

Automatic User Detection. When talking to HomePod, Siri knows it yous so when you want to send messages, read your calendar or get a personalized daily update; you get the right one. As simple as this sounds, it was quite impressive to watch in the demo and a cool feature, especially for the whole family.

No Spotify. Spotify is the most popular music streaming app; however, even though Apple announced that more application is coming to HomePod, there was no mention of Spotify, which is unfortunate, but no unexpected considering Spotify filed a complaint with the EU at Apple over antitrust laws.

No Comments on "The New iPhone 12, HomePod Mini & MagSafe Accessories"