When it comes to buying a new Mac, choosing the right amount of storage is never an easy task. If you’re already a Mac owner, the “startup disk is almost full” message is probably all too familiar to you. Now the most obvious reason for running low on storage is Apple’s tendency to equip most of their devices with small drives. With the release of the 2020 MacBook Air, however, Apple has finally upgraded the base level storage option from 128GB to 256GB SSD, an upgrade that was long overdue. While this change does make your decision a little easier, ultimately, choosing the right amount of storage depends on whether you have a need for more storage space. But just how do you decide?

While Apple has made sure that all iMac and MacBook models now come with a 256GB SSD as standard, don’t be fooled. The first Retina MacBook Pro that was released in 2012 also shipped with a 256GB SSD as standard. Now, almost a decade later, nothing has really changed in terms of storage capacity. While it would be great for Apple to bump that number up again, the chances of that happening are very slim. But truth be told, 256GB is going to be more than enough storage space for the average user and probably even for some professional work. 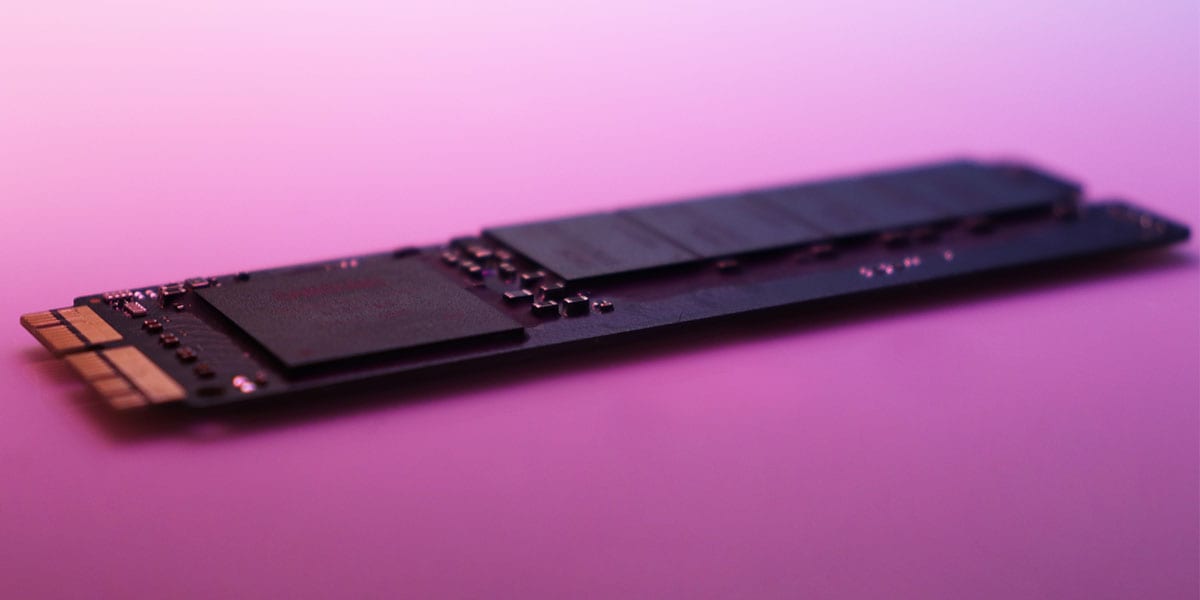 If you have already decided that the MacBook Air is the model for you then chances are, the 256GB SSD will be plenty. A device that is primarily intended to carry out less intensive tasks such as web browsing, email and document writing, will not require anything crazy when it comes to storage space. Even if you want to store photos, videos or music on your device, 256GB should be more than enough. Devices such as the MacBook Pro and the 4K iMac are marketed as powerful machines that are capable of video and photo editing. While this is certainly true, it begs the question as to whether 256GB is enough for all of your editing needs. Not only are the applications themselves fairly large in size but lengthy project files will also take up a lot of space, not to mention the finalised images or videos themselves.

Before making any final decisions, it is important to not only weigh up how much space you currently need but also how much space you think you might need in the future. By now, you are probably aware that Apple makes it virtually impossible to make any internal upgrades to your device once you’ve bought it. The great thing about Apple products is that they tend to last for a really long time. The flip side of this means that you might have to live with your choice of storage for longer than you first anticipated. Looking at your existing storage use is often a great way to predict just how much space you might need in the future. To do this on a Mac, click the Apple logo in the menu bar, select About This Mac and then Storage. On a PC, select the Start button, then System and then Storage. This should give you some idea of just how much storage you may need, once you factor in all of the uses that your machine has.

So What Are My Options?

If you’re looking to buy a brand new MacBook or iMac from the Apple store then you can, of course, purchase your device with an upgraded SSD. With the MacBook Air and entry-level MacBook Pro, you can purchase up to 2TB of additional storage, while the higher-spec Pro can be kitted up to 4TB. The more premium 16-inch MacBook Pro starts at 512GB and can be upgraded to house 8TB of storage. But this will definitely be overkill for the large majority of users.

Similar to the MacBook line, the iMac also comes with a 256GB SSD as standard, however, the standard 1080p version can only be swapped out for a much slower, 1TB hard drive. The 4K iMac, on the other hand, can be upgraded all the way to a 1TB SSD and as you would expect from the name, the iMac Pro starts at an impressive 1TB SSD and caps out at a 4TB SSD.

Now, it may come as no surprise that this is not the most budget-friendly option when it comes to upgrading your storage capacity. Doubling your starting storage to 512GB will set you back £200 and upgrading to a 1TB SSD will set you back a tasty £400, across both the MacBook and iMac range. As one-off payments, these upgrades definitely seem a bit pricey, especially when you can buy an external 1TB Samsung SSD for about £150! But you have to remember that you are purchasing something that cannot be upgraded and will last a long time. Upgrading to the 512GB SSD for £200 may be worth the investment when you factor in the lifespan of the device, especially if you already know that 256GB is not going to be enough.

Similar to the way Apple offers hard drive or SSD upgrades, many independent Apple resellers also provide a similar service. Depending on the system, most Mac resellers will be able to upgrade a number of internal components before you purchase your device, including the SSD or hard drive.

For example, at MacFinder, we provide the option to our customers to be able to configure their device to suit their individual needs. This means that for devices that accept a 2.5-inch drive, we provide the option for you to upgrade this all the way up to a 2TB SSD. In some systems, however, we can even upgrade this to a 4TB SSD! As with all of our refurbished systems, everything is thoroughly tested to ensure that everything works perfectly when you receive your Apple product. Read more about our refurbishment process here.

The 2012 MacBook Pro is regarded by many as one of the best MacBook’s Apple has ever released. This is largely down to the fact that this was one of the last MacBook’s that you could upgrade yourself. Since then, Apple has continuously made it more difficult for the customer to make upgrades to the machine themselves.

If you are, however, the proud owner of a MacBook with a changeable drive, you can always upgrade the hard drive yourself. You can pick up an internal SSD on Amazon for pretty cheap these days and there are plenty of YouTube tutorials that take you through the process, step-by-step. Or if you’re not feeling too confident, you can always pay a professional to do it for you (it should be a fairly quick job so this shouldn’t be too expensive)

An external hard drive is a relatively inexpensive way to expand your system’s storage capacity. While the price of components such as memory and storage is often fairly volatile, over the past few years, the cost of an SSD has fallen substantially. As previously mentioned, you can pick up a top-of-the-range Samsung T5 1TB SSD for around £150 on Amazon. You can even find a 4TB external hard drive for around £80-£90, although you will be sacrificing transfer speeds with a hard drive rather than an SSD.

In terms of capacity, external hard drives are hard to beat. But they are just that, external. If, for example, you are someone that is on the go a lot, remembering to bring them with you and making sure you have the necessary cables can be a bit of a pain. Speed could also be somewhat limited. As a majority of external SSDs use a USB connection to transfer data, an external SSD is never going to be as fast as an internal one. Although the difference between the two is marginal, transferring larger files will ultimately be slightly slower. 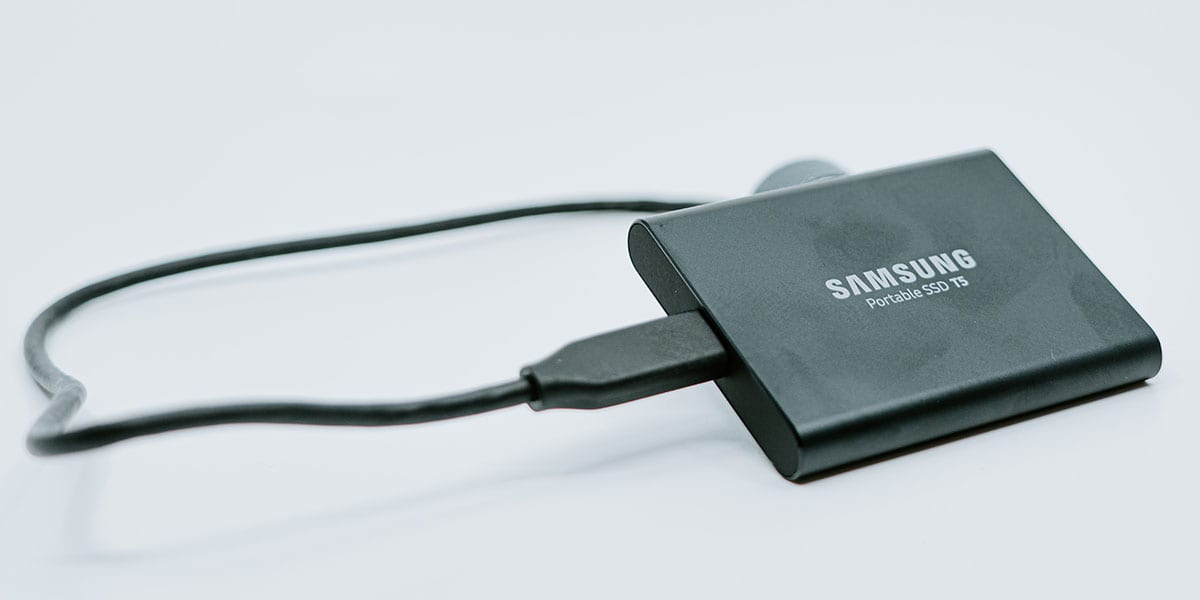 Naturally, if you’re in the market for a new iMac or MacBook, iCloud is going to be your best bet when it comes to cloud storage. While cloud storage is a really easy to use and convenient method of storing files, music, videos and photos, it is not really designed to act as an alternative to a hard drive or SSD as such. Of course, you can save room on your internal SSD for larger applications or files by storing smaller files in your iCloud but it might be a good idea to explore alternative options first.

The great thing about iCloud is that it’s free! (well the first 5GB is anyway) For pretty much everyone, 5GB is nowhere near enough, so Apple offers a monthly subscription plan service:

For more information on iCloud and other cloud-based storage services, why not check out our Ultimate Guide To Backing Up Your Mac.

No Comments on "How Much Storage Do I Need?"