Since the release of its first modular desktop in 1987 Apple has created a host of innovative and technologically advanced Mac computers. Their design followed the revolutionary atmosphere that surrounded Apple, but it was Steve Jobs in 1997 who brought about a dramatic design overhaul. The first Mac Pro was officially born in 2006, and 2013 saw the introduction of a completely brand new design with the release of the ‘Trash Can’, this new design much like marmite, was loved by some and hated by others. But before the official Mac Pro, there were generations of other Macintosh modular desktops from Apple.
With rumours circulating about the potential release of a 2017 Mac Pro update, we thought we’d take a look back at the evolution of the Mac from its humble beginnings as the Macintosh II to the present day.
It can be argued that the Macintosh II, released in March 1987, was revolutionary. It offered, for the first time, colour capabilities; a graphics card could be installed that was capable of handling up to 16.7 million colours. The basic system cost $3,898, and for $5,498 you could buy a version offering 1 MB of RAM, one 800K floppy disk drive and one 40 MB internal SCSI hard disk drive (Source). It ran on a Motorola MC68020 CPU with a speed of 16MHz. It had 8 RAM slots and 6 NuBus Expansion slots. This model was discontinued in January in 1990, in the two years previous to this Apple released the Macintosh IIx and the Macintosh IIci. 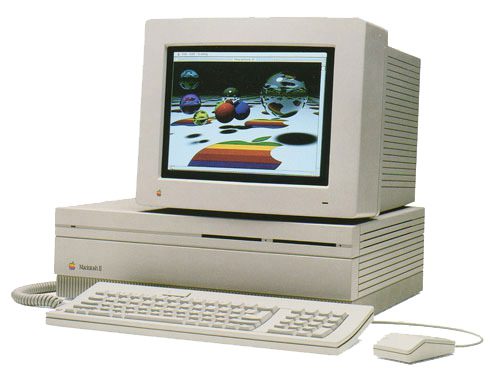 The Macintosh IIx was home to a 68030 CPU and 68882 FPU. It also had ‘breakthrough features’ in the form of the DOS-compatible 1.4 MB SuperDrive and virtual memory. The following year Apple released the Macintosh IIci visually it looked the same as its predecessor but it offered 56% more power, and the biggest improvement it offered was integrated video, meaning that users no longer needed to purchase a separate video card. MacUser said in November 1989 that the IIci was “…may be the best machine Apple has ever produced.” 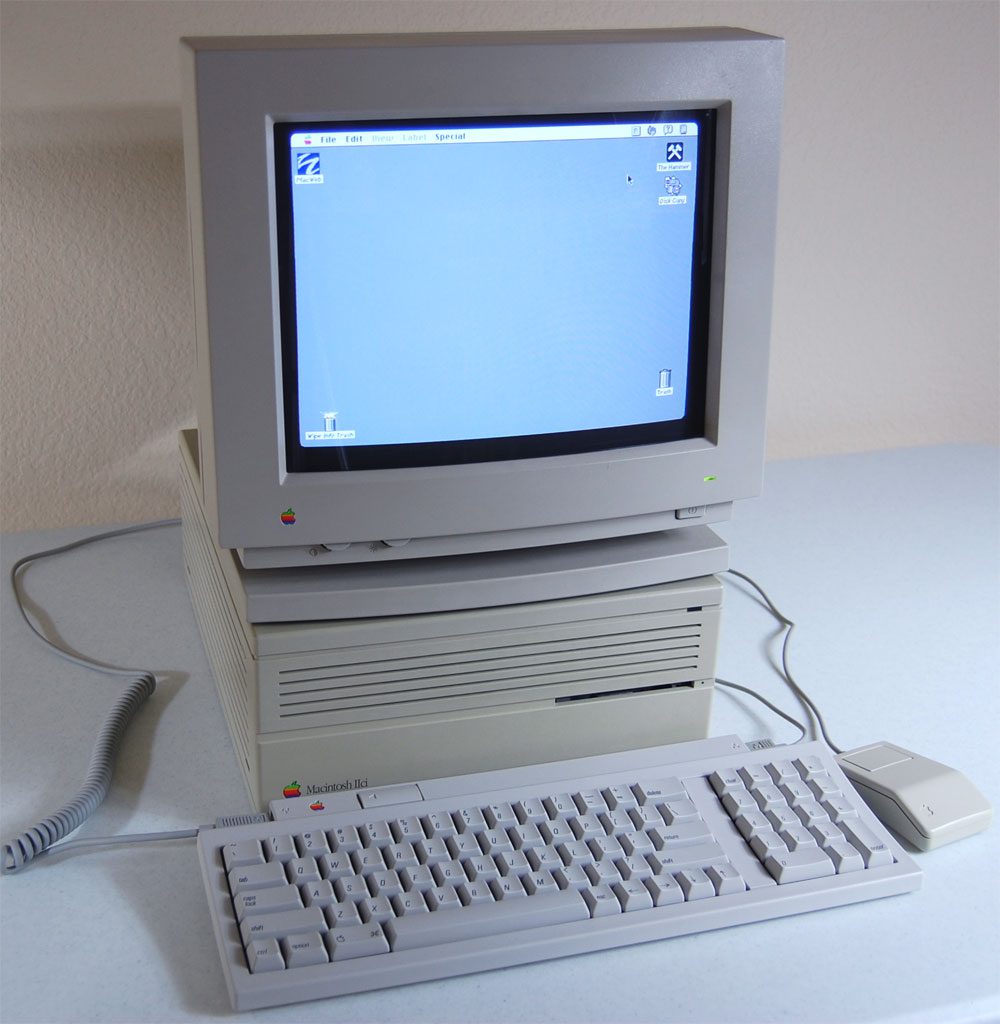 The 1990’s saw a continuous stream of Apple Macintosh releases, between 1990 and 1999 at least one new product a year was added to the Apple Mac family. Machine after machine was released. In 1990 Apple went back to their roots and released the Mac Classic, it retailed for $1000, hitting the price mark that the original Apple team had been aiming for. However, this reduction in price also came with a reduction in performance, leaving the Mac underpowered. In 1997 Apple brought out the 20th Anniversary Macintosh, a limited edition Anniversary special that had the huge price tag of $7, 499, it was not a popular machine, and was the last machine created before Steve Job’s return. Then, in 1999 the Power Macintosh G3 was born, it followed the same type of visual as the first iMac released the previous year, and it had a swing door design that made it easier to access the Logic Board.
But new additions to the Apple Macintosh line weren’t the only updates being made. In May 1991 Apple released the Mac System 7.0, it was the first major rewrite of the Mac operating system. It introduced features such as the ability to use an “alias”, as well as TrueType fonts, file sharing, and QuickTime video software (Source). 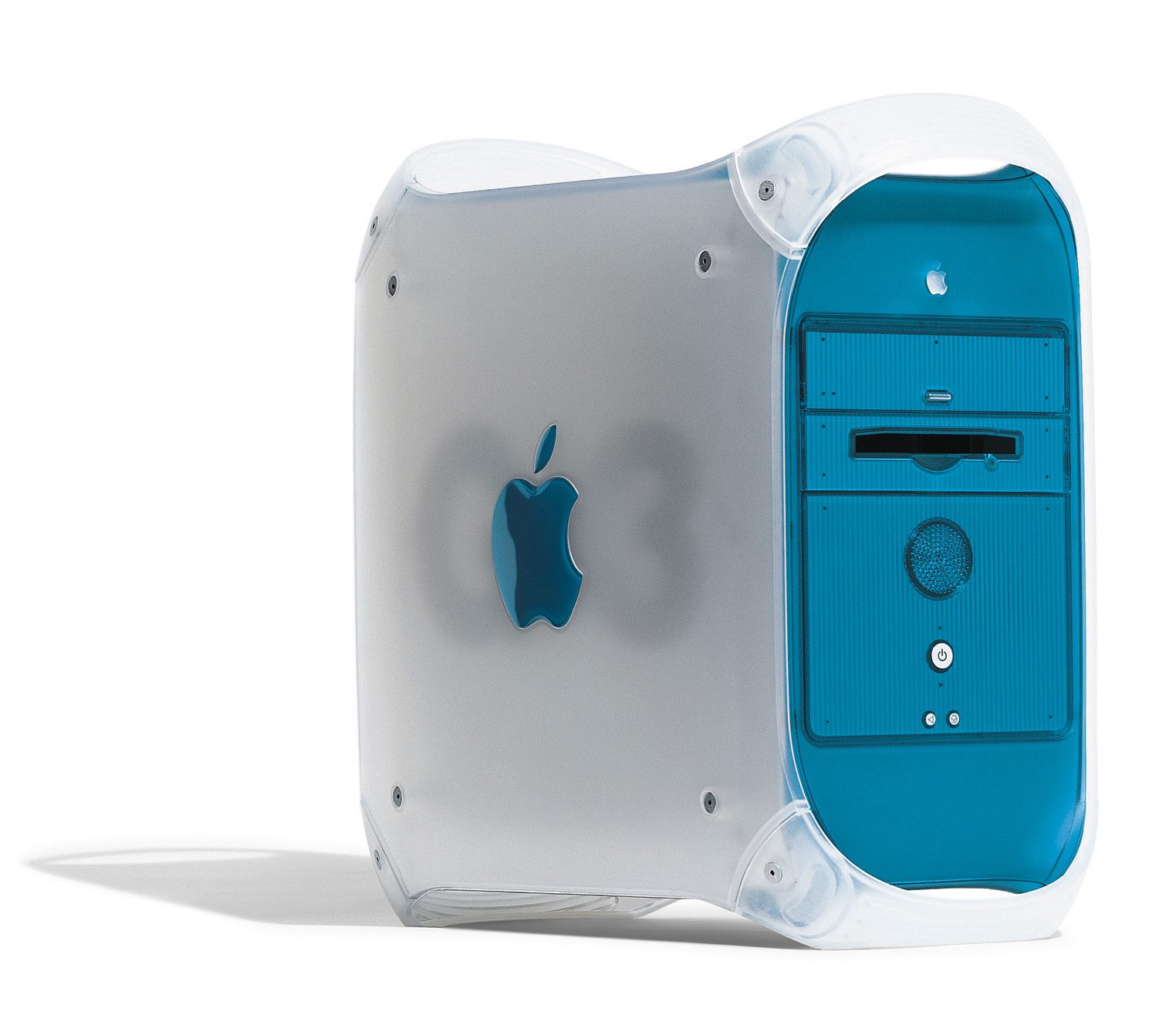 The period between 1999 and 2004 saw the release of the Power Mac G4, a series of personal computers. Apple stated that they were to be the first personal computers, reaching speeds of 4 to 20 Gigaflops. They were the last Macintosh computers able to boot natively to Classic Mac OS. This group of Macs included the Power Mac G4 Quicksilver and the Power Mac G4 P58.
The Quicksilver was announced in 2001, though technically the same as previous G4 models it had been cosmetically redesigned. The Quicksilver housed a Dual 800 MHz PowerPC G4 (7450) processor and had the option to have one of three graphics cards the nVidia GeForce2 MX with 32 MB VRAM, the  Geforce2 MX with TwinView or the Geforce3 with 64 MB VRAM, it also had 2 x USB 1.1, 2 x Firewire 400s, a built in Mono speaker, audio input and output mini jacks, and Apple Pro Speakers mini jack (Source). The G4 P58 was released in August 2002, it featured both a new Xserve-derived DDR motherboard architecture and a new case design, known as “Mirrored Drive Doors” (MDD). 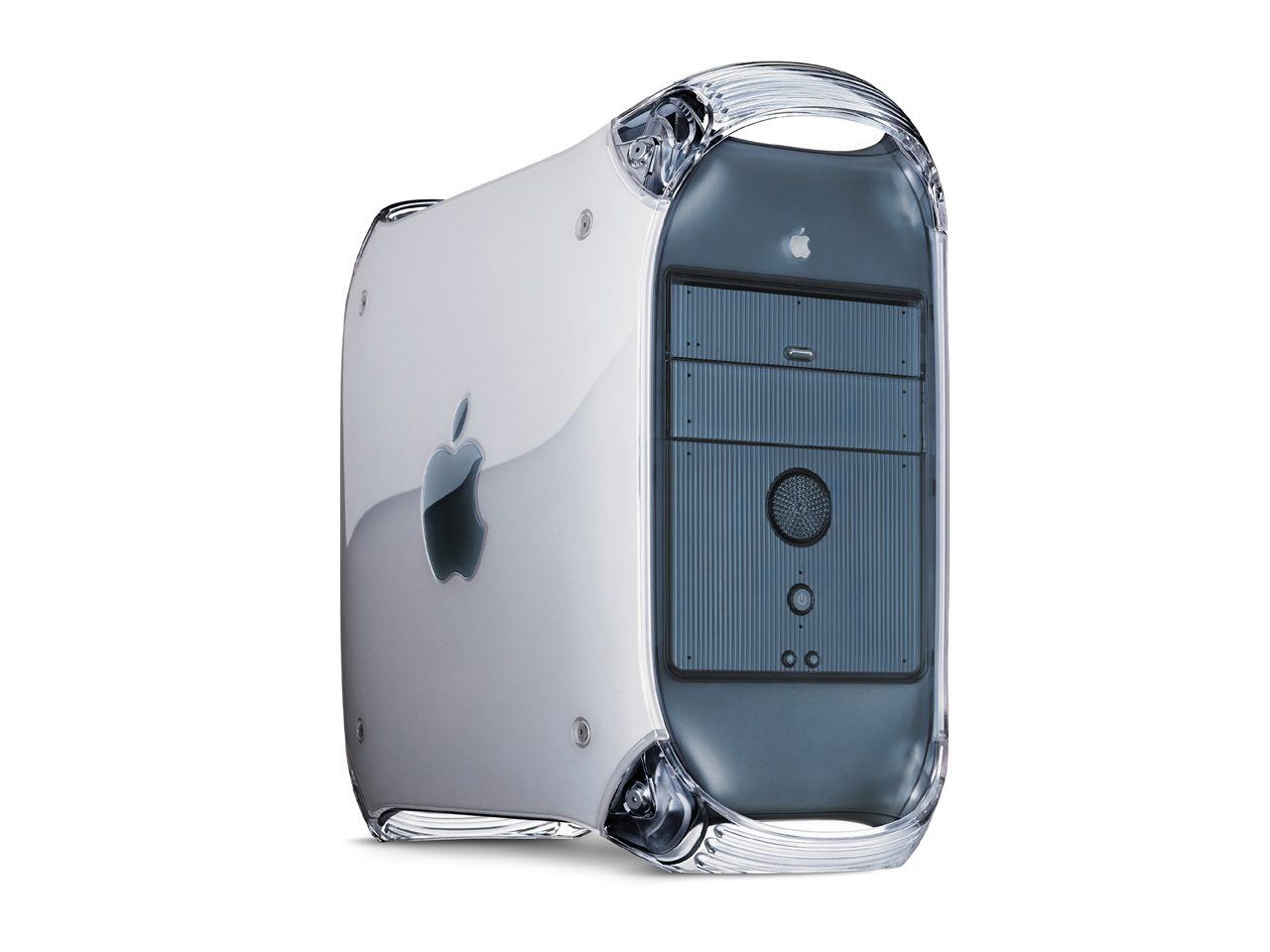 Then in 2006 the first Mac Pro was revealed, it completed Apple’s transition to Intel processors, and took its place as Apple’s professional Desktop Mac, replacing its predecessor the PowerMac G5. Aesthetically it still looked like the G5 (with the exception of a second optimal drive bay), but internally it had been completely redesigned. The Xeon processors required less heat-dissipation than G5 processors, allowing a smaller cooling system. It had four easily accessible hard drive bays (for a BTO maximum of 2 TB of storage) and easy access to its 8 RAM slots, which allowed for a Maximum of 16 GB of RAM. This was the first time that Apple offered its consumers a fully customisable Mac Pro model. 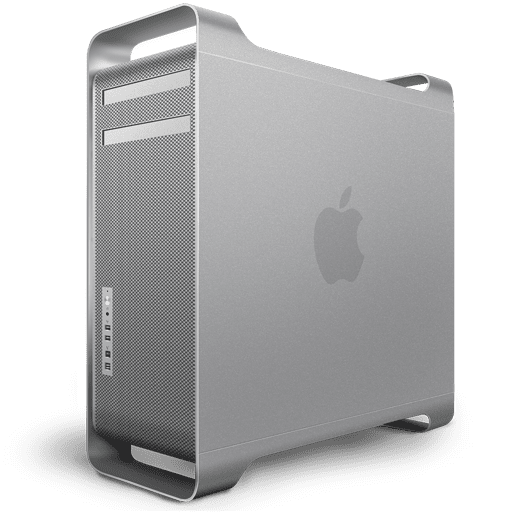 We then arrive at Apple’s latest Mac Pro release, the Mac Pro 6,1, that became available in 2013, it had not only changed in appearance but also in performance. It offered users higher performance power thanks to the introduction of the Intel Xeon E5 processor and dual AMD FirePro graphics. However, it no longer offered the option for internal expansion, with any expansion that you required having to be done externally. 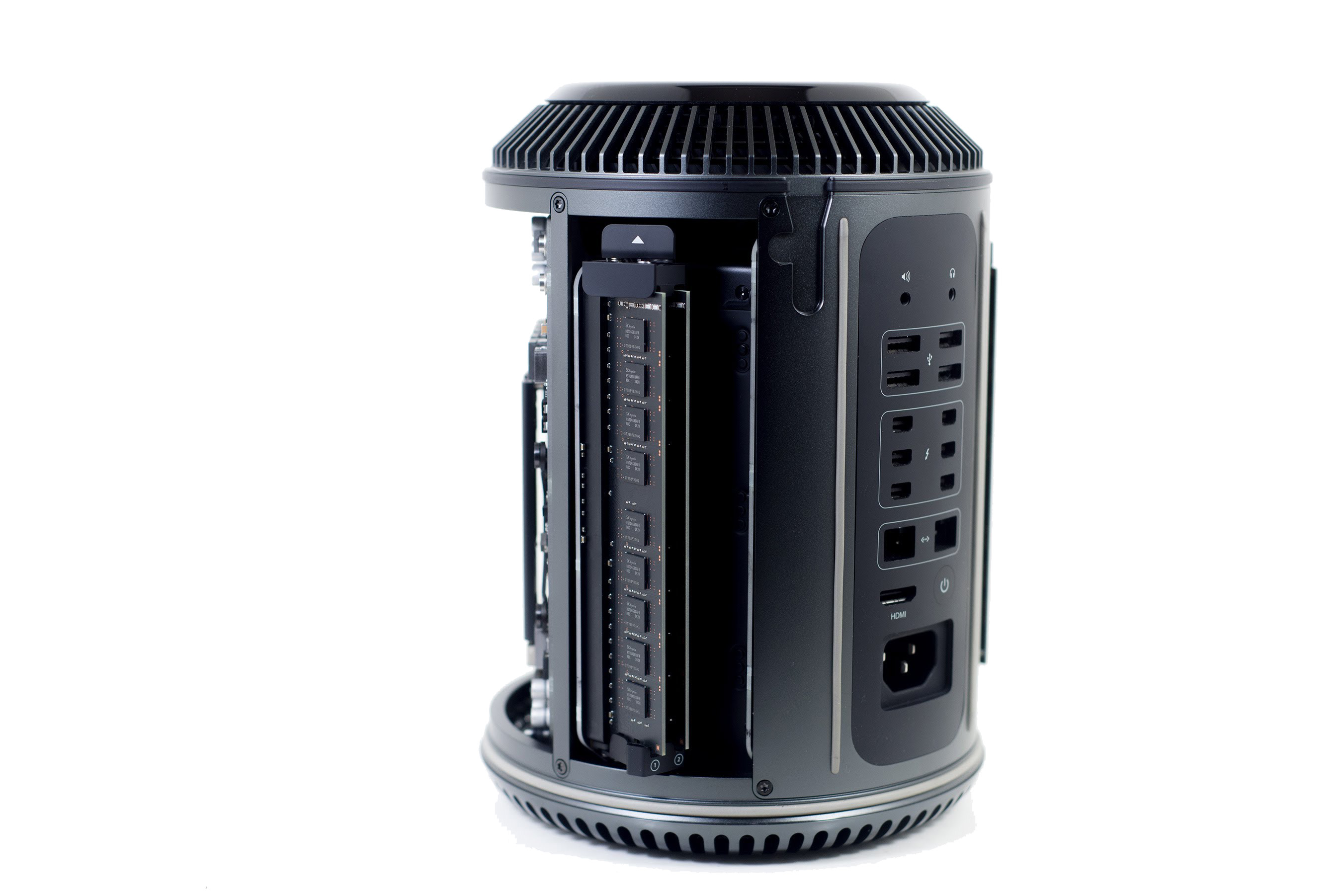 And that ladies and gentlemen brings us back to the present, and the ever increasing rumours of some form of Mac Pro announcement this year, everyone is offering different opinions about what the future holds for the Mac Pro; Some suggest that the design of the Mac Pro will stay the same but it’s internal processors will be updated. Mac World claims that the Mac Pro might never be updated (Source), others suggest that we will be presented with a Mac Pro with 10 USB 3 ports, but as yet nothing has been confirmed, and so for now at least, we must wait, and make do with new Mac Pro concept art: 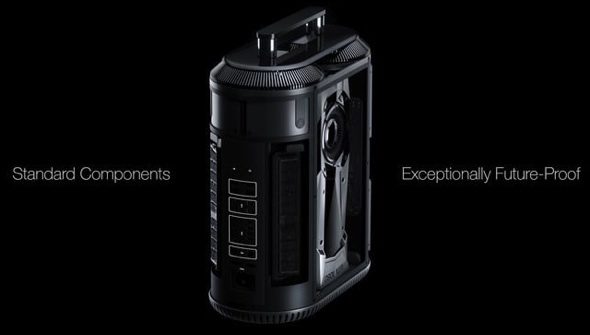 No Comments on "The Mac through the ages, from 1987 to the present day"