You should be aware by now that earlier this year, Apple announced that they will be transitioning over to use their own custom ARM-based chips in their new line of MacBooks. As we edge closer towards Autumn, we expect that Apple may have another announcement fairly soon. This time, hopefully, we might get an idea as to which model will be first to ship with the new Apple Silicon architecture inside. It has been rumoured that the entry-level MacBook Pro and Air could be the first to be updated. We thought it would be a good idea to give you the rundown on these two models and which one is right for you.

When comparing the surface look of the two models, they both look really similar, in fact, almost identical. Both use the same aluminium, uni-body design which offers exceptional build quality, an aspect that we have come to expect from the MacBook line. The Pro does have a slightly boxier design whereas the Air continues to sport its traditional wedge shape making it slightly slimmer. This wedge shape design makes the MacBook Air the preferred of the two models for longer typing sessions as it alleviates the pressure from your wrists and will ultimately be more comfortable over longer periods of time. The Pro is also ever so slightly heavier than the Air but you would still have a hard time telling them apart in hand.

Following the most recent upgrades this spring, both MacBooks now feature the Magic Keyboard which has replaced the ever so controversial Butterfly keyboards of the past. So you can now expect a more reliable, more satisfying typing experience from both devices.

There is one rather noticeable difference between the two, however, and that comes in the form of the touch bar found on the MacBook Pro. Although this is a handy feature, it should by no means play a significant role in your purchase decision. Sure, the touch bar does have its benefits, providing you with additional functionality such as access to different shortcuts, volume and brightness control. But there are far more important features that we would recommend you base your decision on.

Another hot topic when it comes to Macs over recent years has been the port selection. Both devices here feature very minimal ports, only making use of USB-C Thunderbolt 3 ports and a headphone jack. The difference here is that the MacBook Air, no matter which configuration you opt for, only has the two USB-C ports. Whereas the MacBook Pro can be configured so that it has four USB-C ports, although this will come at an additional £500 cost. 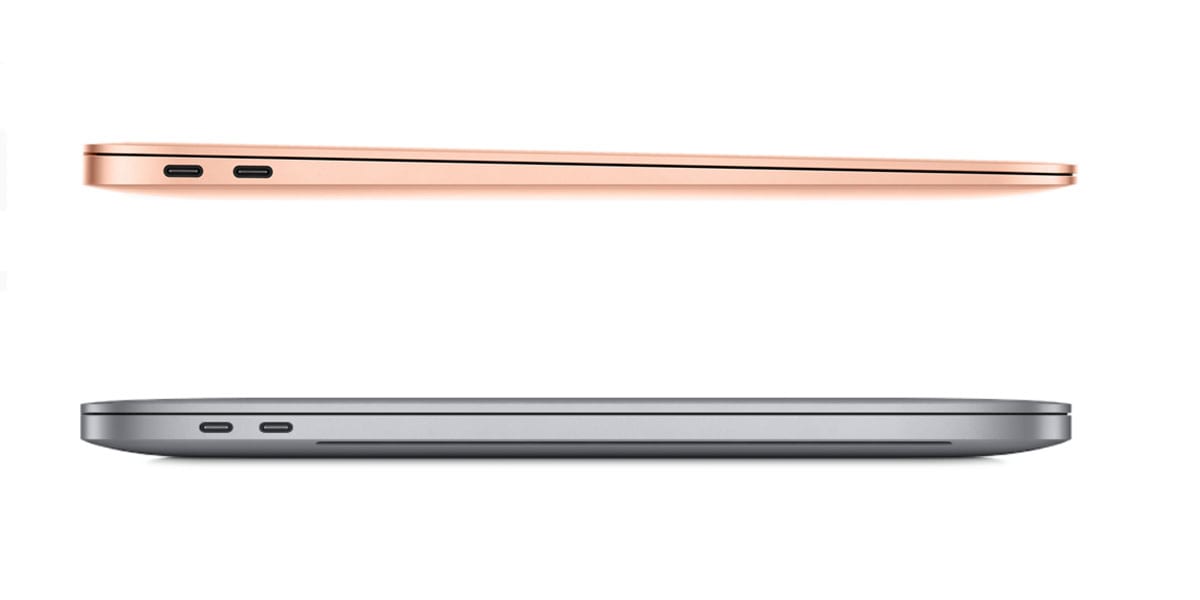 Again there’s not much difference here either. Both devices feature a 13.3” Retina display with a resolution of 2560×1600 that contains over 4 million pixels and to most people, will look exactly the same.

But when we dig a bit deeper, as the name suggests, the MacBook Pro does come out on top. The MacBook Pro’s display does get quite a bit brighter when compared to the Air. If therefore, you intended to use your MacBook outside or perhaps in a really bright room, this would be something to consider, as the MacBook Pro will perform better in these conditions.

For serious photo or video editors, or anyone that requires a high level of colour accuracy, the MacBook Pro will be the better option for you here as well. By no means is the display found on the MacBook Air inaccurate, in fact for most people, it will be perfectly suitable. But if colour accuracy is important to you, we would suggest going with the MacBook Pro here, due to its support of P3 wide colours.

When comparing the spec-sheets of both base model devices, it is hard to separate them. Both base models now come with an SSD with a minimum capacity of 256GB, a welcomed change when compared to previous years. Although their capacities are identical, this doesn’t necessarily mean they will perform the same. The SSD found in the MacBook Pro will have slightly faster read and write speeds, but again, that does not mean that the Air is slow by any means.

When we look at the CPU’s of both devices, the base model MacBook Air features a brand new 10th gen, dual-core Intel Core i3 processor. Whereas the MacBook Pro has a slightly older 8th gen, quad-core Intel Core i5 processor. Now if you really want a 10th gen Core i5 processor in your MacBook Pro, you’re going to have to spend the additional £500 and purchase the £1,799 model from Apple.

But what do these numbers actually mean? Now for everyday, low-intensity tasks such as web browsing, email and document writing both devices are going to be more than capable. Even handling medium to slightly heavier tasks, both machines are going to be proficient, but you will start to notice the fan on the MacBook Air spinning up quite a lot more when compared to the Pro. The MacBook Air has notoriously poor thermal performance when running medium to more intensive tasks which can result in the fans getting noticeably loud. The Air has a much smaller and thinner chassis when compared with the Pro which doesn’t allow for as much thermal headroom. The MacBook Air will therefore reach a performance limit much quicker which could lead to your machine being throttled in an attempt to conserve energy. Now, this may not be a problem for most people, but in a world where video conferencing is becoming more and more popular, trying to speak above the noisy fans on your MacBook Air could pose an issue for some.

But it’s not all bad for the MacBook Air. In terms of battery life, the Air is the clear winner here. The Air will offer you 20% more usage on a single charge when compared with the Pro model. So if you’re someone that is out and about with your MacBook all day, this is definitely going to be the winner here.

Hopefully, we have given you some insight for when it comes down to deciding which model is right for you. Ultimately, the MacBook Air does come in at a slightly lower price of £999. This is an excellent price for perhaps a student or a professional that doesn’t necessarily need the features and performance offered by the MacBook Pro. For the majority of users, you’re not going to need the extra performance that you get with the Pro. But for those that are looking for that extra bit of power, and a slightly better, more accurate display the MacBook Pro comes out on top. With everything considered, it may be wise to wait until the end of September before you make your decision. It is likely that Apple will perhaps not release, but could announce when we could expect to see the new range of Apple Silicon-based Macs releasing. It is rumoured that the entry-level MacBook Air and Pro models will be the first to be upgraded with the new ARM chips, so we would recommend holding on fire on a new MacBook just for now. But if having the most recent model isn’t important to you, and you want to save a bit of cash, why not check out our range of refurbished MacBook Pros and MacBook Airs.

No Comments on "MacBook Pro vs MacBook Air (2020), Which Option Should You Pick?"