Choosing a storage option for you Mac Pro used to be as easy as deciding how much data your hard drive disk (HDD) needed to store. These days it’s a little more complicated with the solid state drive drive (SSD) being able to viably store ever increasing amounts a data, as well as flash storage options becoming more commonly available. Add to this TRIM, RAID configurations and PCI-E slot based storage and you’re in for a world of difficult decisions. Hopefully this article will give you the information you need to make the process a lot less painful.
We’re going to take in in depth look at HDDs, SSDs, and flash storage. We will also consider the ways in which they can be configured and how they affect performance and reliability. Each type of drive has specific strengths that make them suited to certain types of storage and each come in at different price points, a factor that will also be analysed. Whether you’re building your dream Mac Pro, or a budget system that needs to perform, we’re here to help with all the information you need.
So without further ado, let’s get into the comparisons. 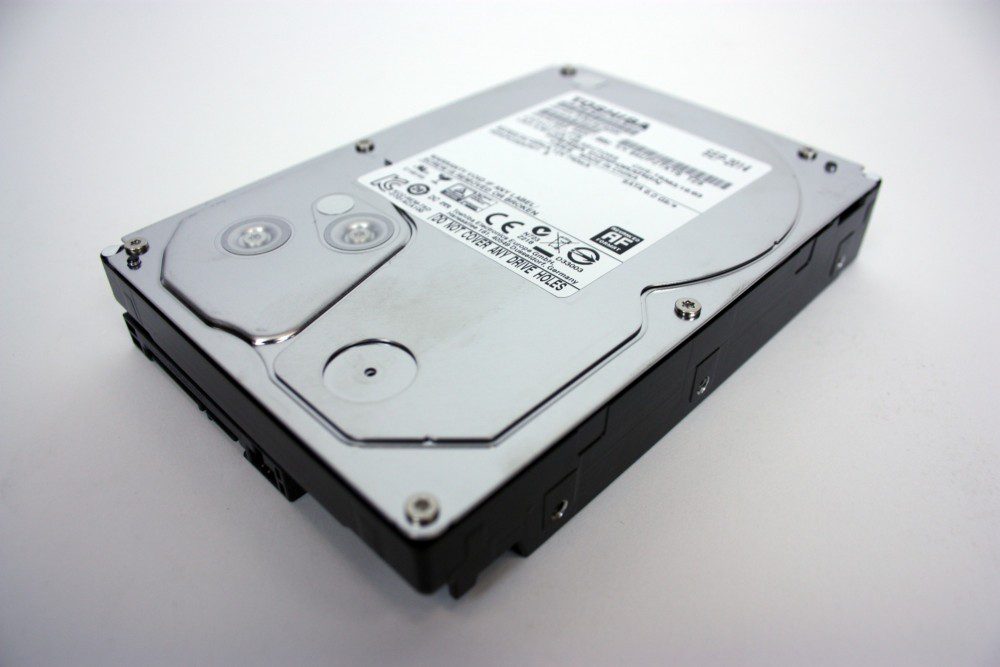 Hard Drive Disks (HDD) store information on traditional spinning disks, they come in 3.5″ (the size the Mac Pro uses) and 2.5″ (laptop format). HDDs ruled the storage roost unopposed for around 50 years (up until the mass market introduction of SSDs in around 2007/08) and are now the elder statesmen in the storage game. They are tried and tested and can store the largest amount of data of the three options, up to 6TB (due to HDD current size limit). The Mac Pro can support up to 5 HDDs, 4 in the HDD slots and 1 in the lower disk bay using an adapter, giving up to 30TB of internal storage. HDDs are also the cheapest of the trio per TB of storage with the standard Toshiba drive we tested coming in at £42.50/€53.50/$67 per TB.
HDDs have, however, left their glory days behind and although they are the cheapest and have the largest volume of all storage options they are also the slowest. A typical 7200RPM HDD will read and write data at around 180MB/s which is considerably slower than an SSD and a fraction of the speed that flash storage is capable of. It should also be considered that the more data you have stored on your HDD the slower it will become, it is not advisable to fill more than 50% of a HDD’s capacity and you should never use more than 80%. HDDs are also the least reliable of the three (not that they break constantly, they are just more vulnerable to problems due to the nature of storing information on spinning disks). We recommend all users back up their data regardless of the storage type they use, therefore should your HDD fail, you will only lose the time spent restoring it.
It is possible to RAID HDDs together to increase read and write performance, but this would require a separate RAID card to be installed at an extra cost.
HDD Summary
Great for: 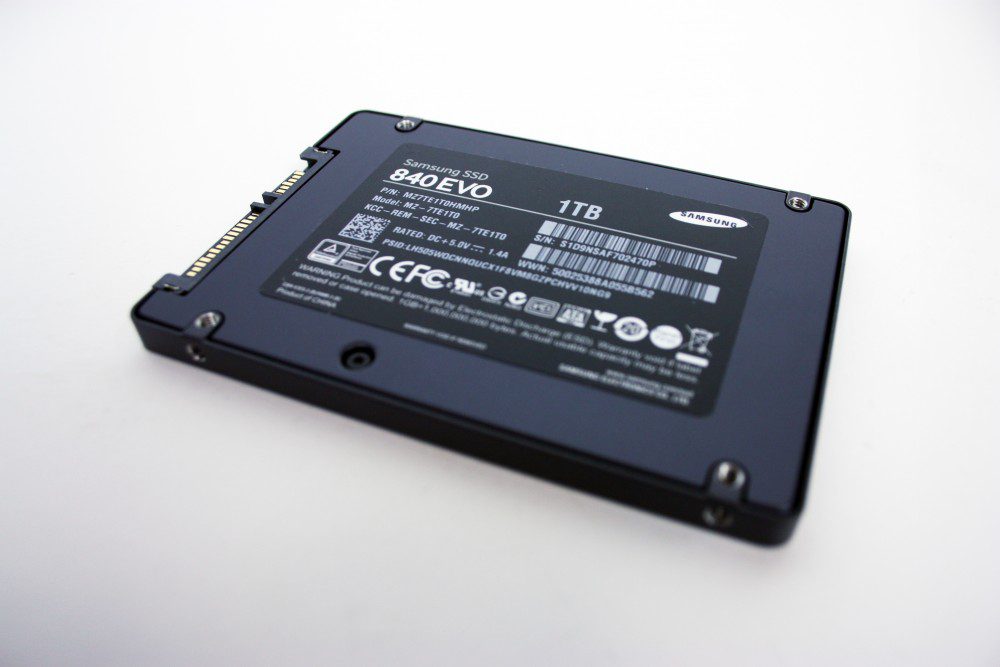 First introduced to the mass market around 2007/08, solid state drives (SSD) are now establishing their position as a financially viable storage solution. Capacity of SSD devices currently tops out at 1TB but they come in a wide variety of capacities up to this point. As their name suggests SSDs contain no moving parts and for this reason they are less prone to failure than HDD drives. They are also speedier than HDDs and can be installed on PCI-E slots, providing considerable read and write speed increases. SSDs generally come in the 2.5″ laptop HDD format, but can be installed into the Mac Pro’s HDD bays using a caddy. The Mac Pro can support 5 SSDs in HDD bays and 3 more on PCI-E slots (as one slot will be taken by your GPU).
SSDs have always been more expensive than HDDs per TB storage capacity, the first 64GB SSD Apple launched in the MacBook Air cost $999. Prices are, however, now becoming more reasonable. The SSD we tested, the Samsung 840 EVO 1TB, costs £400/€504/$632 per TB when installed in a HDD bay and £450/€567/$711 per TB when installed on a PCI-E slot (due to adapter costs).
At a cost of around 10x more than traditional HDD drives per TB storage, as you may expect, you get much better performance from an SSD.  In a HDD bay you can expect to see 270MB/s read speeds and 260MB/s write speeds. This is a decent jump and is more than noticeable if you are using your SSD to store working data and applications. SSDs, however, have another trick up their sleeve, TRIM. TRIM enables SSDs installed in Mac Pro systems to perform at their best regardless of the amount of data stored on the drive (TRIM must be enabled using TRIM enabler software, this currently does not work in 10.10). So whether you’re at 1% or 99% capacity, you will still get great speeds. The performance jump of SSDs over HDDs increases considerably when they are installed on PCI-E drives. An SSD on a PCI-E slot will read at around 500MB/s and write at around 450MB/s, we would always recommend this route if you have the PCI-E slots spare. 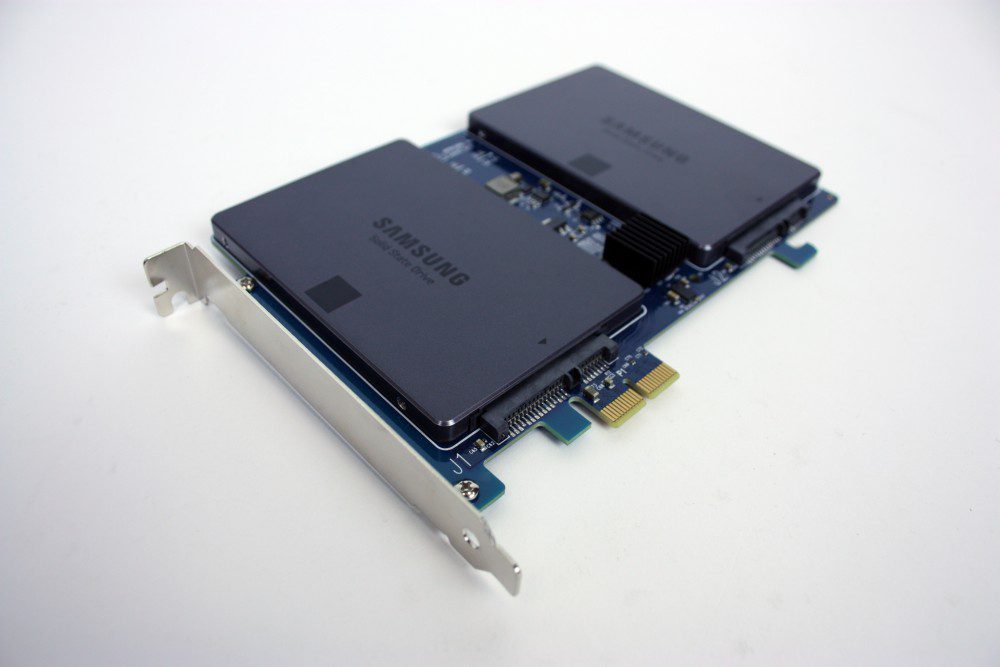 When storage is installed on a PCI-E slot rather than HDD bay it has the added advantage of being able to be configured in a striped RAID formation without a RAID card. You can even install two SSDs on one PCI-E adapter and configure them in a RAID for blistering speeds. Obviously the adapter is more expensive and you need two SSDs (cost per TB is £475/€599/$750), but a RAID will provide a huge performance increase. Two SSDs in a striped RAID formation on a single PCI-E slot will read at around 700MB/s and write at around 720MB/s. These types of speeds will have a massive positive affect system performance when OS, applications and working data is stored on them.
*A note on striped RAID configurations: Should one drive in the RAID fail, the whole RAID system will need to be rebuilt and restored, as always, back ups are essential.
SSD Summary:
Great for: 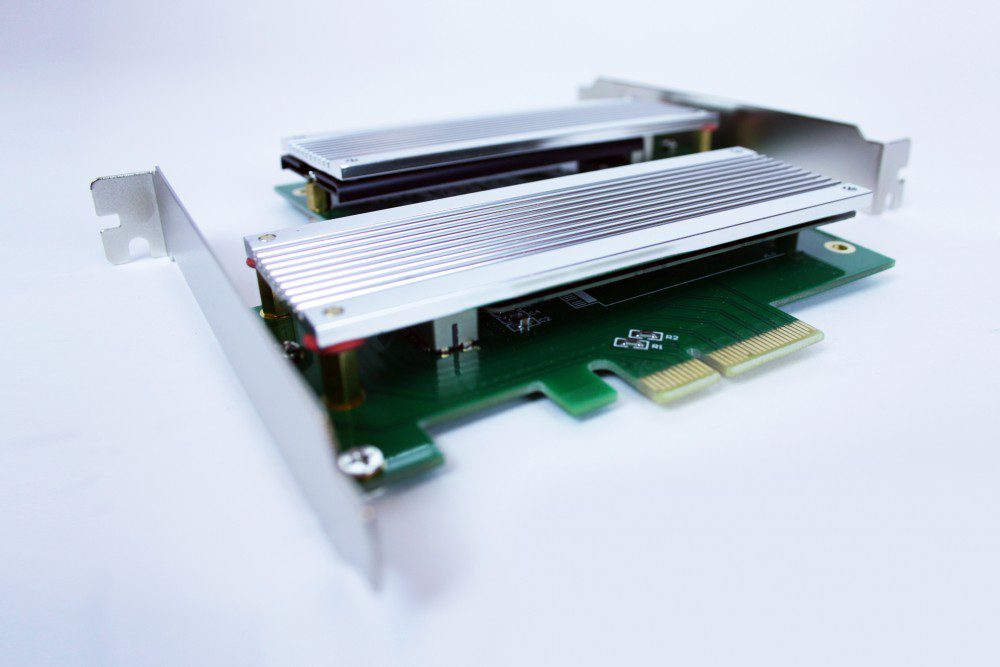 Flash Storage devices are the new kids on the block, whilst they are essentially SSDs, they represent a huge jump in performance over their SATA limited relatives. This jump in performance does come at an increased cost, but for those with a need for speed flash storage is definitely worth it. Flash storage devices can only be installed on the Mac Pro’s PCI-E slots using adapters. As the Mac Pro only has 4 of these slots and 1 will be taken by your GPU, they are a precious commodity. Theoretically a maximum of 3 can be installed (6 if mounted on dual PCI-E adapters). As with the SSDs flash devices can be configured in a striped RAID formation without the need for extra hardware. Cost per TB of storage is the highest of the three options. We tested the Official Apple 1TB Flash Storage blades mounted on custom PCI-E adapters, the cost is £750/€946/$1,184 per TB.
Although flash storage is high cost, when you see how it performs, you will see why it demands such prices. Flash storage can hit read speeds of around 1,100MB/s and write speeds of 975MB/s when installed on a single PCI-E slot. Current max capacity is 1TB, but cheaper 256GB and 512GB blades are also commonly available. When two 1TB blades are set up in a striped RAID configuration over two PCI-E slots things start to get silly. Read speeds are around 2,100MB/s and write speeds 1750MB/s. Flash devices have all the benefits of SSDs, TRIM still works (natively supported without TRIM enabler on official Apple blades) and they are just as reliable, the only difference is the increased read and write speeds.
If you’re a serious professional user who demands ultimate performance, flash storage is easily the best storage option currently available for storing OS, applications and working data.
Flash Storage Summary:
Great for:

So which storage option is the best for my Mac Pro 5,1?

Perhaps the title of this section is a bit silly, as we’ve seen in our analysis of the options, it depends on your budget and requirements. To get the full picture of how the different options compare check out the graph below. Then we’ll delve a bit deeper and summarise how you should make your decision. 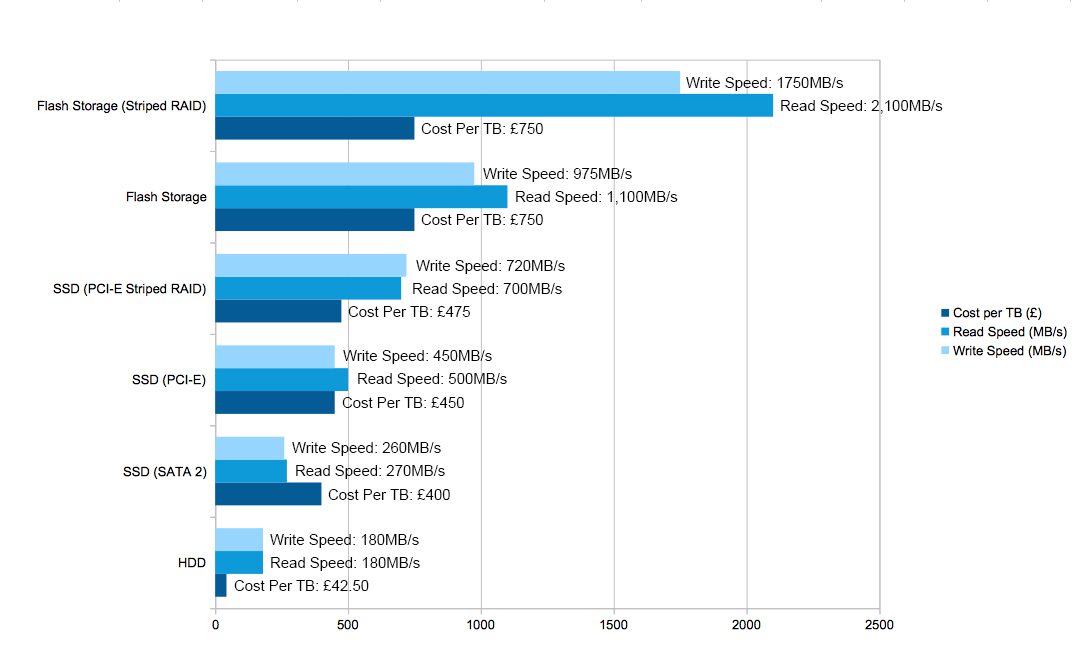 So you’ve seen the figures, heard the pros and cons of each option, which should you choose? Well, of course it all depends on your budget and what the system is for.
HDDs are old technology and although they are still a strong choice for large volume storage, realistically, their days are numbered. Go for HDDs if you need internal capacity and aren’t too fussy about read and write speeds.
SSDs and flash devices are the new kids on the block. SSD devices will only continue to see speed and capacity increases, as well as price reductions in the future. 5 years ago solid state drives were only for those with the deepest pockets, nowadays they are standard on most mid-range and even some low range systems. If you’re on a budget, get a HDD for internal capacity and an accompanying smaller SSD (ideally on a PCI-E slot) for storing your OS and apps, this way your apps will perform great and you still have capacity to store a large amount of data. For example a 250GB PCI-E SSD and 2TB HDD would cost £285/€359/$450.
If performance is of the upmost importance, flash is always the best option. PCI-E based flash storage offers unmatched speeds up to 10x faster than traditional HDD drives. Again, if you want performance but have a lower budget, go for a smaller flash device and marry that with a larger SSD or HDD. You could, for example, marry a 512GB flash storage blade with a 4TB WD Black HDD for £650/€820/$1,026 granting awesome performance and considerable internal storage.
As always with storage, no matter which option you go for, make sure you back-up (twice).
All of the storage options we have covered today are available in our custom Mac Pro 5,1 systems, configure yours here. Should you have any questions about building a system feel free to email us at [email protected]

6 Comments on "HDD, SSD or Flash Storage? Which storage option is the best for the Mac Pro?"

6 Comments on "HDD, SSD or Flash Storage? Which storage option is the best for the Mac Pro?"